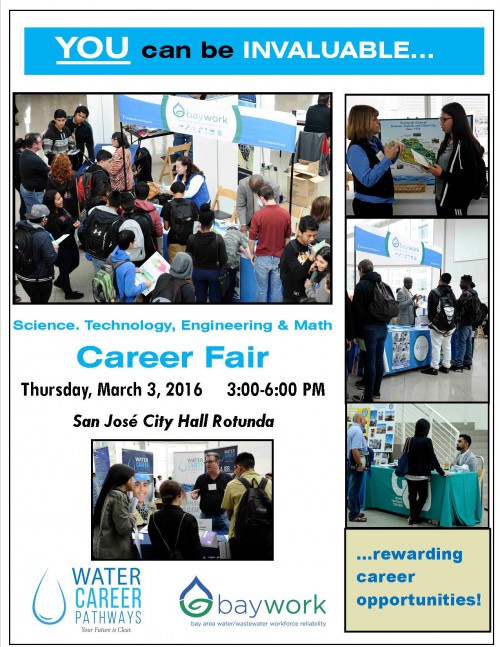 The third annual BAYWORK career fair held at the San José City Hall Rotunda on Thursday, March 3 was better than ever, with over 480 people attending two sessions. Over 330 students and teachers from eight South Bay high schools attended the morning session that focused on career explorations in water and wastewater. In the afternoon, around 150 people participated in the career fair that was open to the general public.  They came to talk to the 87 exhibitors from 30 Bay Area water and wastewater agencies, unions, schools, and others who had booths at the free event.

The Career Exploration Fair for high school students ran from 10 a.m. until noon. At this fair, Bay Area agencies with staff in mission-critical jobs, such as wastewater and water treatment operators, engineers, electricians, collections staff, and distribution operators gave demonstrations on what they do for a living and talked to the students about what they love about their careers. College representatives from area schools including Laney College, Solano Community College, Evergreen College, San Jose College, and Los Medanos College were also present, talking to the students about their programs. LinkedIn also had a booth, talking to students about how to set up their own LinkedIn account.

Students came from eight area high schools including Live Oak High School in Morgan Hill, Westmont High School in Campbell, and the Andrew P. Hill High School, the William C. Overfelt High School, and Independence High School, all from San José. To make the day more interactive, fun, and engaging for the students a PASSPORT card was given to each of them. To qualify for a prize, each student had to get a stamp from at least five of the 12 categories on the card, including mission-critical jobs and schools. Prizes included BAYWORK pens, BAYWORK stainless steel bottles, BAYWORK flash drives, and mystery gifts such as hardhats and sweatshirts.

Later that day, from 3:00-6:00 p.m., the career fair opened to the general public. At this event, representatives from agencies including the San Francisco Public Utilities Commission, East Bay Municipal Utility District, Santa Clara Valley Water District, and Dublin San Ramon Services District, talked to the participants about how to get a job in water and wastewater, and spoke about job openings now and where to search online for career opportunities in the future. Area schools, union representatives, and others were also present to talk about what they had to offer.

Resources from this Workshop